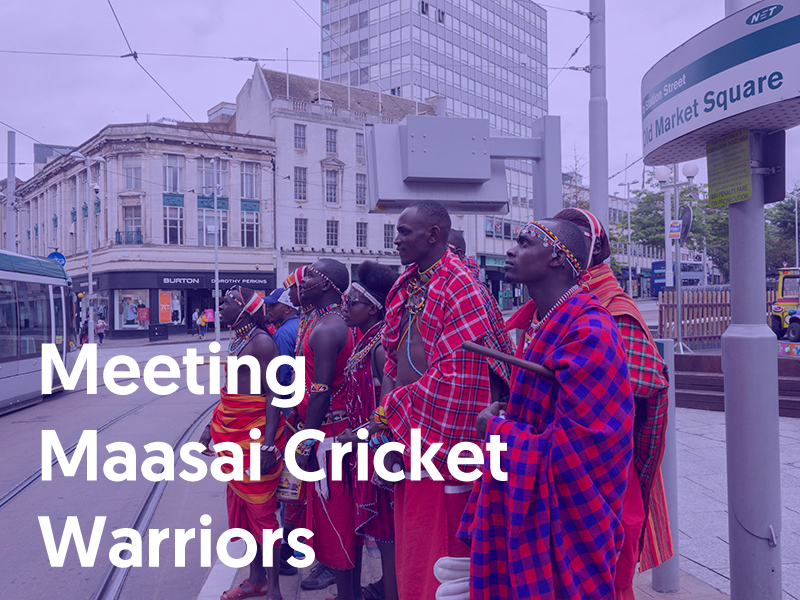 Last week, on Tuesday 21st of August, we had the pleasure of hosting a day with the Maasai Cricket Warriors from Kenya,  as a part of their UK Tour organised by Mojatu Foundation. This action-packed day was full of activities for both the Maasai Cricket Warriors and the public. Our aim was to introduce the Warriors to Nottingham and its citizens. Scroll down for the full story.

First thing in the morning we jumped onto the tram heading to Clifton South for our first event. [Walk the Talk] is our monthly walking dialogue, supported by KEOLIS/NET Nottingham. We had a quick cuppa in our Communities Hub and set off to see the best views Clifton Grove Nature Reserve had to offer. Perhaps even more interesting than seeing the Warriors enjoying the landscape in their traditional Maasai clothing, was observing surprised faces of Clifton locals. Distracted from their daily activities, they greeted us, asked about the Warriors, and even had a quick football kick around. Even people in cars and lorries could not resist honking their horns and greeting us as we walked towards Clifton Village. The Maasai Cricket Warriors really enjoyed the change of scenery and the opportunity to experience the local nature, as well as interacting with other walkers. 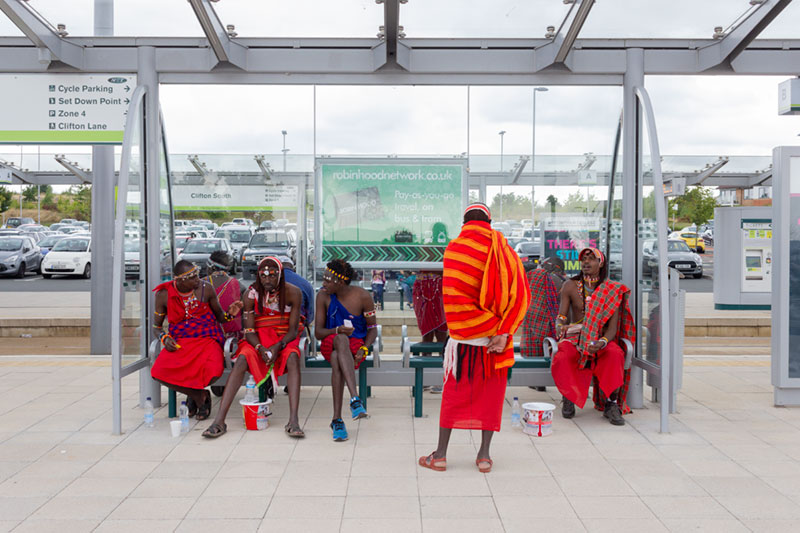 Back to the city

After another quick tram journey back to the city centre and a rejuvenating lunch break at the fantastic [Sobar], we went to show the Warriors Nottingham’s iconic Robin Hood statue and set up for a quick game of cricket with the public. This was very popular, especially with the younger population, and needless to say they did Nottingham proud. Meanwhile other Warriors posed for the pictures with Robin Hood. We were joined by the Sheriff’s Guard and CPO and headed to the Nottingham Beach. Despite the beautiful weather and scorching heat, there was no time for sunbathing. Every passerby was intrigued by their presence and wanted a picture with them by the Left Lion. Families relaxing at the beach had an unique opportunity to see the Warriors perform their cultural songs and dance. Following that we met with the Sheriff of Nottingham for a cup of tea and discussion about team’s campaigns and work in Kenya. 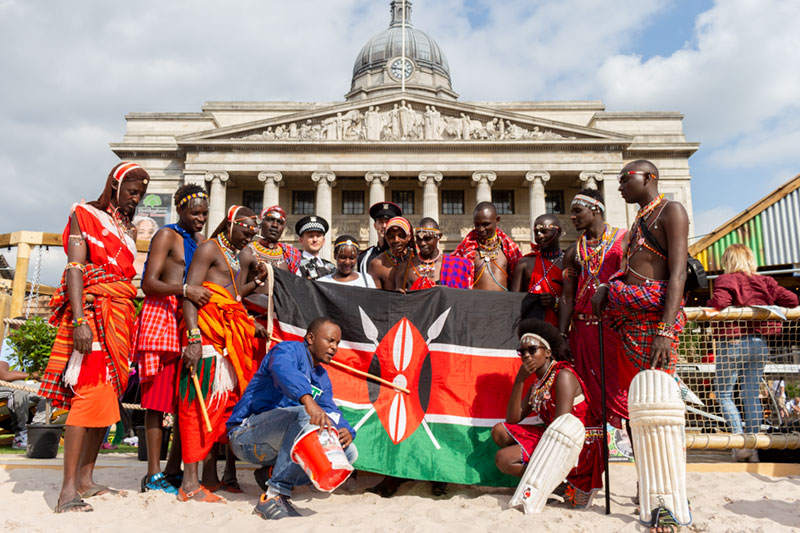 A night of culture

You cannot come to Nottingham and not visit Nottingham Contemporary. We had partnered with the gallery to organise yet another film screening and a tour of the current exhibition. This time we showcased [Warriors] (2015) – a film about the Maasai Cricket Warriors. This documentary follows Maasai Cricket Warriors on their journey to England to compete in the 2013 Last Man Stands world cricket championship. It also shows their passion and commitment to ending FGM and other social issues faced by their community.

Film night was concluded by the panel discussion with the Maasai Cricket Warriors’ Captain – Sonyanga Ole Ngais, Valentine Nkoyo and Dr Edith Iheama of Mojatu Foundation, Kinsi Clarke from Nottingham Refugee Forum, and Grace Brough – former Chair of City and County FGM Steering Group. They discussed the issues faced in Kenya, such as Female Genital Mutilation (FGM), child marriage and lack of women’s rights, and the work that Maasai Cricket Warriors do to tackle those problems. Attendees could also find out how FGM affects Nottingham and the UK in general, and what we can do to eliminate it altogether.

The Mojatu Foundation’s lobbying has resulted in Nottingham City Council becoming the first to declare itself as a city of zero tolerance to FGM, which includes committing to work with grassroots organisations, survivors and affected communities.

“FGM violates human rights and is child abuse. Full stop. If we support every single survivor to say FGM ended with them in their families we can end FGM in a generation.” – Valentine Nkoyo, Mojatu Foundation CEO. 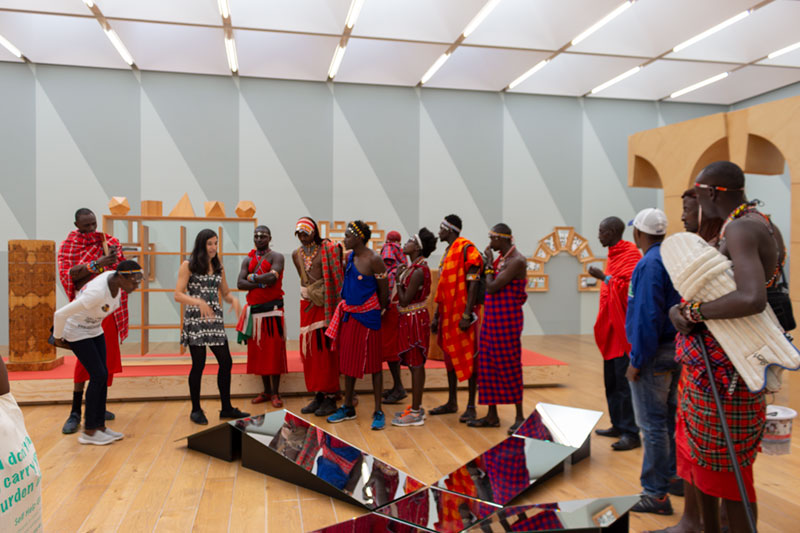 Not just about cricket

Although Maasai Cricket Warriors are most famous for their sport endeavours, their work extends far beyond the cricket field. Their aim is to end FGM, using their love of cricket to unite and empower communities, and penetrate the cultural problem that belies the issue. FGM is at the core of other social problems in their community. Girls who are mutilated are also married young, and consequently denied an education. 10 years after starting their mission, the Warriors have convinced Maasai elders to stop mutilating girls and to send them to school.

However, it is not just about having their voices heard. During the panel discussion, team captain,  Sonyanga Ole Ngais, explained that they seek to empower women and give them a platform to speak about FGM and child marriage. For that reason, they set up a female Maasai Cricket Team, with Malawua Ene Ng’ais as a Team Captain, who also joined the Warriors on the UK tour.

What you can do to help

Maasai Cricket Warriors struggle with a lack of funding to carry out their work. However, with your help they will be able to do so much more. Valentine Nkoyo – the main force behind the Massai Cricket Warriors’ visit has set up a fundraising page, with all proceeds going to the Maasai Cricket Warriors, young people both in UK and Kenya, schools, refugees and asylum seekers, new and emerging communities and the wider society. You can read more and make your contribution on justgiving.com/crowdfunding/valentine-nkoyo.

Although the Tour is slowly coming to an end, you can still meet the Warriors, as there are still events due to happen this week. Go to maasaicricket.com for more information.

Previous Photo Gallery: A Day with the Maasai Cricket Warriors
Next Walk the Talk: BME Health at Colwick Country Park