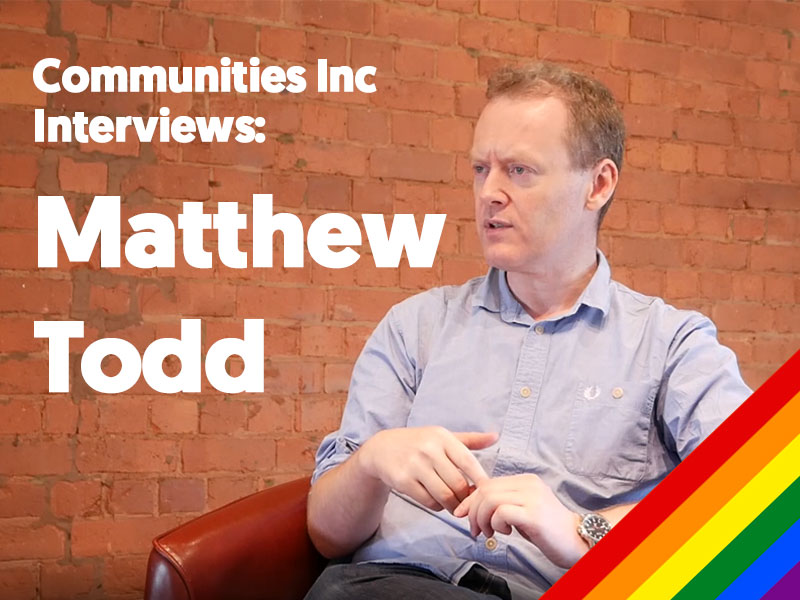 Matthew Todd, award-winning author and former editor of Attitude Magazine tells Communities Inc why we all have a responsibility to stand up to hate.

On 26th July, the night before Nottinghamshire Pride, we met with Matthew Todd before his event ‘Pride: An evening with Matthew Todd’ at Waterstones. We talked about the history of Pride, his new book Pride: The Story of the LGBTQ Equality Movement and his views on hate crime against members of the LGBTQ community.

“It’s everybody’s responsibility to eradicate hate crime… that’s the fundamental nature of what society’s meant to be. If I am not there for you, then if something bad was happening, why would you be there for me?”

What made you decide to create Pride: The Story of the LGBTQ Equality Movement?

I wanted to tell the story of Pride and the history of the last fifty years or so because when I wrote my first book Straight Jacket, there’s a chapter specifically about … all the homophobia from the media in the eighties, HIV and aids, and the kind of hysteria that came along with that.

When I was travelling the country doing talks about (Straight Jacket), so many young people said to me (they) had no idea it was so bad in the eighties… and it made me realise I really don’t know the history and how can people understand if the history isn’t being told.

If you see what’s happening in Birmingham in the schools with parents protesting, it’s still controversial to even teach that LGBTQ people exist, let alone to tell the story of our lives and our history. So I thought it was important at the anniversary of the Stonewall Riots to tell that history.

How has hate crime against the LGBTQ community changed over the last 50 years, since the raid of the Stonewall Inn in New York?

It’s hard to know how hate crime has changed because up until 1967 here it was completely illegal… Those kind of numbers wouldn’t have even been recorded and there’s so many people who’s stories we don’t know of what it was like to be gay in the 1950s and 60s, and then the 70s as things started to change. The stories we do know are of people who were out but there must have been whole generations of people who completely suppressed it… because they were in fear of their lives.

I think now that (hate crime) is an issue, now we record them and the police largely do take it seriously, that’s a positive step forward… but there’s still quite a lot of people who are not out and who find themselves in situations which they feel they shouldn’t be in and so don’t report it. There’s all this complication about shame.

I would certainly say that things are better. Even walking around Nottingham today and seeing the rainbow flags in so many shop fronts… To think of where we’ve come from, I’m really glad that these companies will positively support LGBTQ Pride. I welcome that; it’s a really positive message.

Can you think of a recent hate crime which was directed at a member of the LBGTQ community and why you think it would have been helpful if a witness had intervened?

We just had the situation in London with the two women on the bus who were on a date and there were a group of men who allegedly asked them to kiss in front of them and then attacked them. Clearly, it would have been helpful if people had intervened in a situation like that.

I do understand that people are so scared now because things can escalate so quickly but perpetrators of any kind of crime need to know that it’s not acceptable and that only happens if people do step in. We, as a society, have a responsibility to step in – in some way that’s safe – to stop these things from happening.

Whose responsibility is it to eradicate hate crime against members of the LGBTQ community and what one thing would make the most difference in enabling this to be achieved?

It’s everybody’s responsibility to eradicate all hate crime… that’s the fundamental nature of what society’s meant to be. It’s really important that we’re all there for each other because if I’m not there for you, then if something bad was happening, why would you be there for me?

I see today what I have not seen in the past; I see straight people sticking up for gay people… That’s not to say that’s everybody. There’s still lots of people who are homophobic and transphobic – we see that in the press all the time – but I think things are getting better. We all have to take responsibility; if any of us see any kind of hate crime we need to make sure the police have been called, make sure that the person is okay. We should do whatever we can, safely, to make sure that person is alright.

Finally, your discussion tonight in Waterstones is part of the celebration of 50 years since the start of activism in the fight for equality. Do you think it’s possible that in another 50 years, we will have achieved equality for everyone?

Scientists have been warning us that we’re in danger of destabilising the planet; David Attenborough keeps saying that the collapse of civilisation is on the horizon. I would say that what we’ve been talking about – hate crime – is about a civilised society, that’s fundamentally what it means. If we’re not a civilised society that means I don’t care if I see someone being beaten up. Human beings can be really violent and its civilisation that stops that.

(So) if civilisation is on the verge of collapse, what does that mean? It means – potentially – violence, so if we don’t make this a priority, we’re going to see women in real trouble, LGBTQ people in trouble. I’ve campaigned for a long time for specifically LGBTQ issues but I think it’s really important that we see the bigger picture; that other things which might not seem specific, really do affect us… It’s really important that we wake up.