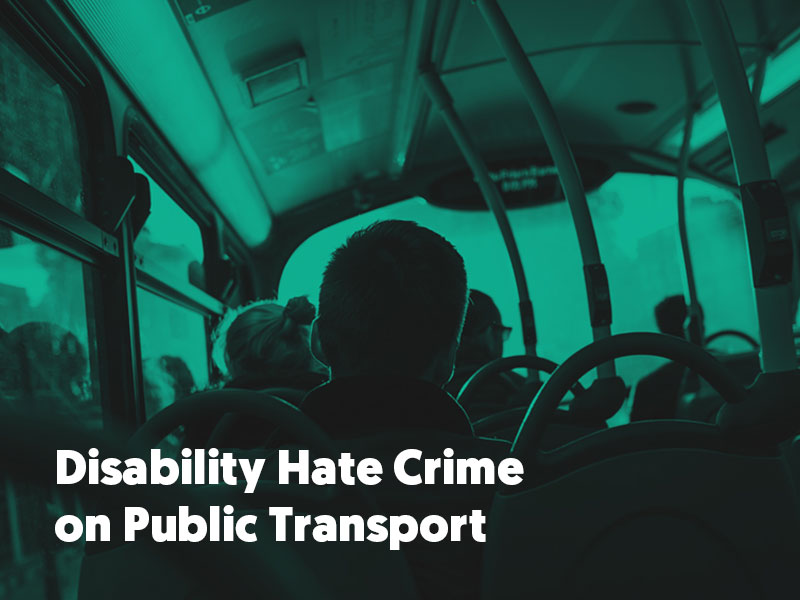 During National Hate Crime Awareness Week recently, we ran disability dialogues in collaboration with Nottingham Mencap and Disability Support. The aim of these was to discuss with service users and transport providers how hate incidents arise on public transport and what can be done to address the issue.

As part of our research, we also spoke individually to people with disabilities about their own experiences, including Marie*…

Marie, a young woman with learning disabilities, recently experienced a hate incident on a bus. After being verbally abused by a group of three young people on board, Marie was scared and upset and felt compelled to move to another seat, listening to music to try to block out their voices.

Even after the perpetrators had left, Marie felt too afraid to get off the bus, instead waiting until the last stop before alighting. This meant she had to then wait for another bus, to go all the way back to her intended destination.

What is a hate crime?

Like many people who are a victim of hate, Marie didn’t report the incident at the time, to either the driver or the police, because she was too scared. This is a common reason for not reporting, as is being unclear about what constitutes a ‘hate crime’ or what the difference is between an ‘incident’ and a ‘crime’. At Communities Inc, we define them as:

However, it’s important to remember that ANY hate incident or crime should be reported – not just ones which would be defined as crimes.

Even if the police decide that an incident is not a crime, it is important to report it, as this can prevent it from escalating, being repeated, or happening to someone else. The police may be able to take actions to prevent future events and it also means you can access victim support services.

How do I report a hate incident/crime?

Other reasons for not reporting include a reluctance to speak to the police directly or, while the incident is occurring, a fear of being overheard by the perpetrator. The good news is, there are several options available, including texting (if you are on a train) or reporting online (which can be done when you feel safe enough to do so).

Why does reporting matter?

So, what’s the answer?

For all types of hate incidents and crimes, one solution is to focus on prevention, by encouraging greater community cohesion and increasing opportunities for people to meet others whose lives differ from their own. This allows the negative misconceptions people may have of certain groups and communities to be dispelled.

Another is, of course, to raise the level of support and encouragement for victims, so that they feel confident enough to report.

The solution with arguably the most potential to eradicate the problem though lies in the hands of another party altogether; the bystander.

What is the bystander effect?

The bystander effect is when a group of people witness an incident but no-one takes action because they all think someone else will, leaving the victim feeling isolated. In Marie’s case, after witnessing the incident on the bus a passenger reported it to the driver as they left. When an individual does take action like this, it can have a powerful effect; in Marie’s case, the bystander’s intervention helped her to feel she was not alone and, to anyone else present, it reinforced the concept that the perpetrator’s behaviour was not acceptable.

How can I intervene safely if I witness a hate incident/crime?

At Communities Inc, we established the Stand By Me programme to empower others to take positive action, like the passenger on Marie’s bus did. The basic premise is that there are 3 safe, indirect interventions:

What can transport providers do to tackle hate crime?

As well as appreciating the bystander’s support, Marie was relieved to find out that the bus she was travelling on during the incident had cameras in place and it was these which enabled the police to identify the culprits. Measures by transport providers such as this can make a profound difference, as can empowering staff to support victims through bystander awareness training. Another crucial reason for providers to support staff with this training is that many of the hate crimes occurring on public transport are committed against members of staff.

Whose responsibility is it, ultimately, to stand up to hate?

For Marie, her experience of a hate incident on public transport has not eradicated her enjoyment of travelling by bus but she would advise others with disabilities to “sit near the driver or… (at least) downstairs.” Why though, should one person’s experience of the transport system be limited in this way by others and why should it be the victim’s responsibility to hold others to account?

One of the points raised time and again at our events for National Hate Crime Awareness Week, was that it’s not the responsibility of any one group or individual; it’s up to all of us to make clear that hate crime is not acceptable, regardless of where or how it takes place.

Look out for our dialogue debrief addressing disability hate crime on public transport, a review which we will publish to summarise our findings at these events.

Find out more about our Stand By Me project and the SEE, REPORT, SUPPORT actions you can take if you witness a hate crime, by reading our Bystander Intervention Guide.

*Marie’s name has been changed for reasons of confidentiality.

Poems which inspire us: Kat Kotlarska