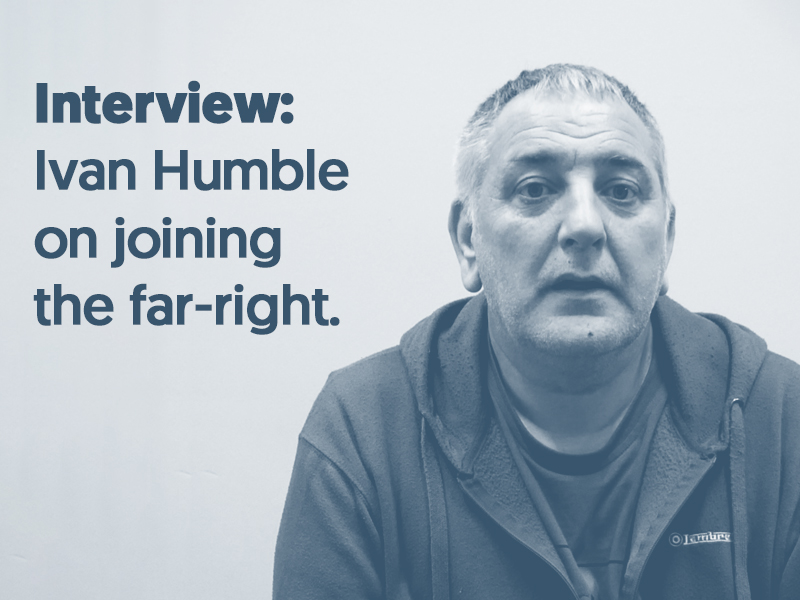 At our recent dialogues: ‘Positive Exposure: Tackling the far-right narrative’, our guest speaker, Ivan Humble, talked about his experience as a former member of the English Defence League (EDL) and explained what motivates people to join far-right groups.

Ivan, who now works as a training provider at Me and You Education – an organisation which specialises in training programmes addressing radicalisation and extremism – spoke after the event to our Communications Assistant, Jo Weston, about why he joined the EDL and what happened five years later, when he knew he had to leave the group…

Why did you get involved with the English Defence League (EDL)?

In 2009 I had health issues, was a victim of domestic violence, a single dad (with two kids at home), was on benefits and was angry at the world. Nobody would listen to the genuine concerns I had, especially the people who should have listened to me. I wanted some bogeyman to blame and I found my answers online, which helped my decision to join the EDL.

As a member, how did you go about radicalising and recruiting others?

It was quite easy, which is scary… I’d talk to people and find out what they feared most. In 2009 the biggest fear was mosques… on YouTube, there’s a video… which covers everything bad that could go on in a mosque; that one video was what we used to send to people. It increased their anger and fear.

There was no hidden strategy, we didn’t head-hunt people. It was just anyone who showed interest. We’d have a conversation with them and corroborate their fears.

What made you question your involvement with the EDL?

When I first met the Muslim community, I realised they shared some of the same fears we did. I’d never considered that cos I was too busy attacking our differences…

What motivated you to leave the group?

When I decided to leave in 2014, it was difficult because I was leaving behind a lot of friends… not everyone was bad. I felt I couldn’t carry on because of the amount of communication I had with the Muslim community by then. I became friends with lots of Muslims and they became a big part of the things I was doing.

Positive Exposure is a project which promotes British values and challenges negative stereotypes about minorities and the state of the nation.

How did leaving affect your personal and family life?

It was the best thing I’ve done in a way as it brought my family back together… I was passing my kids on to my mum and dad a lot, not giving them my time. (Leaving the group meant) being able to give all my time back to my kids, rebuilding our relationships and trying to have a normal life again.

I did get a lot of hate in the early days (after leaving). It’s not as bad as it was but the way I deal with the hate is to treat it like karma… it doesn’t justify it, but it makes it easier for me to deal with.

Why do you think there’s been a rise in people supporting far-right movements?

We’ve learnt nothing from history; we’re still using labels and putting people in tick boxes. We’re not having the difficult, important conversations that need having… There’s such a big ‘us and you’ narrative at the minute. We need to start having ‘me and you’ conversations.

Brexit’s been a big part of it… 17.4 million people voted to leave and in the last three years, everything’s been done to go against that vote, that’s what it seems like to everybody. There’s always going to be some people that want to make their point heard and many of the people that are listening are those on the far-right.

What would you say to others who want to leave far-right groups but are scared of the possible repercussions?

There’s various groups out there (to help people leave), one of the main ones is Exit UK. Speak to somebody who (you can talk to) and won’t be judged by, that way you’ll find it easier to come out. For most people in the far-right, nobody listens to them; they just need that one person to listen. A good few people will come out once they know there’s support there.

“It’s the people on the street that need a safe space to be able to say what they think, to challenge things”

Lastly, how do you think we can prevent people from being drawn into extremism in the first place?

Since I’ve been working for Me and You Education, the only way I’ve noticed… is education. Not just in schools, which is great; we need to educate the general public as well. It’s the people on the street that need a safe space to be able to say what they think, to challenge things… That’s why conversation is so important.

Find out more about our Positive Exposure work on the Our Work page.

Poems which inspire us: Shamsher Chohan on ‘The Cold Within’

Poems which inspire us: Kat Kotlarska