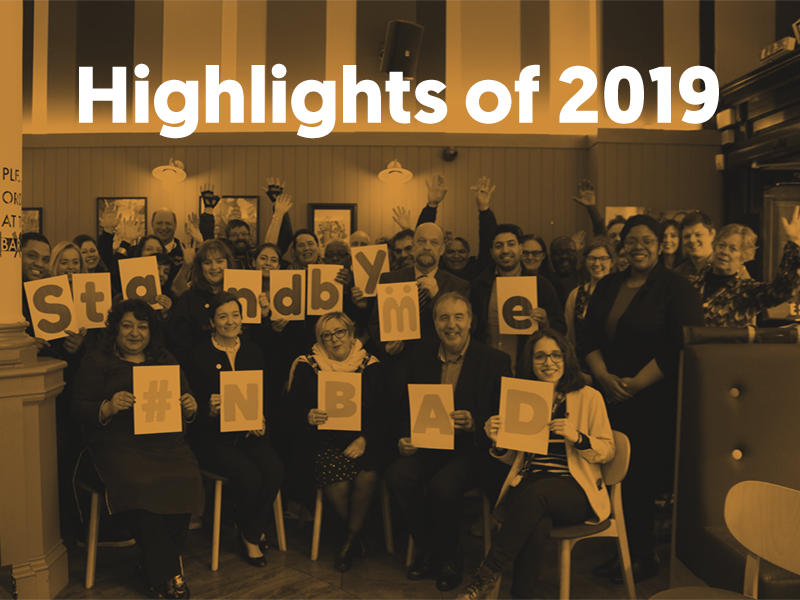 2019 was a year of challenges and transformations. Our bigger projects like Stand by Me and Building Stronger Communities were coming to an end, and we faced many uncertainties in the first half of the year. Despite those challenges, we continued to deliver our work where possible and organised some fantastic events. Read more about our team’s favourite moments.

On March 13th of 2019, we held the first official marking of National Bystander Awareness Day, which we set up back in 2018. This event aimed to raise awareness of safe and simple ways people can intervene in hate incidents.

“NBAD was my highlight of the year as it provided a focus for raising awareness of the small things that people can do to help others, that can make a big difference.”

Throughout the whole week, we held a variety of awareness-raising events across Nottingham. From stands with the British Transport Police, Tell MAMA and Nottingham Trent University students, to a film screening with Nottingham Contemporary and a badge-making workshop with the New Art Exchange. We also worked with Nottingham City Council to produce campaign resources.

On the day we held a breakfast meeting for the members of the Public Sector, including the Sheriff of Nottingham Catharine Arnold, Councillors, and voluntary organisations. The event started with a piece of invisible theatre performed by Parmjit Sagoo and Ian Pringle, which sparked a lot of interesting conversations. We had a range of speakers, including Nottinghamshire Police and Crime Commissioner Paddy Tipping, Chief Executive of Broxtowe Borough Council Ruth Hyde, and Councillor Toby Neal who spoke about the importance of bystander interventions.

After the hugely successful Digging Deep Project, we continued our relationship with Nottingham News Centre to develop new work. The Black Miners Museum Project enriches and enhances current visitor displays through the integration of recently unearthed narratives, memories and creative representations of former coal miners of black/African-Caribbean heritage within the UK mining history. We had the pleasure of visiting the National Coal Mining Museum for England where Digging Deep Exhibition is currently on display.

“The contribution of black miners was an important but untold story. It’s a valuable lesson for us all to learn from – how they integrated into the indigenous community and contributed to the economy. It’s great to see this work on display in such a prominent place.”

In the run-up to the National Bystander Awareness Day, we worked with Nottingham City Council to produce and distribute a range of resources across the city. Our See, Report, Support posters appeared in Nottingham’s community centres and libraries, and hundreds of our pocket intervention guides have been handed out to the citizens of Nottingham. A social media campaign complimented everything.

“I am very attached to our bystander intervention work because it changes people’s lives. I helped to shape its language and visual identity from the very start. There is nothing more rewarding than to see people across the city unite over something you created.”

We are pleased to announce that we are going into 2020 with a new, fresh branding that we have been developing throughout last year.

“It’s been an incredibly fun and creative project for me, but the final Communities Inc logo has come about unexpectedly. I had been designing a logo for one of our projects, and when I finished, I thought it perfectly represented Communities Inc – different components coming together to form a cohesive entity. I am pleased that everyone on the team liked it.”

As we’ve grown with the Building Stronger Communities project, so did our communications department, gaining a creative writer – Jo Weston. That meant we could expand our work and produce more digital content such as interviews. The very first one of these was an interview with Matthew Todd, award-winning author and former editor of Attitude Magazine, just a day before we set out our stall at Nottinghamshire Pride.

“Notts Pride was the perfect way to experience what a difference our work makes. People were reluctant when I first approached them with leaflets, but as soon as I explained what I was giving out, they were keen to learn more. As a writer, I also enjoyed interviewing Matthew Todd about his book on the history of Pride. He was really supportive of our work.”

As a part of our Building Stronger Communities project, we have been running a series of workshops for organisations working with people that are vulnerable to far-right ideologies. We held far-right awareness workshops to learn how the far-right operates, and an action planning session to produce city-wide solutions.

“Amongst all the reports of hate incidents in our society, here was a room full of people keen to eradicate this behaviour. The talk by Ivan Humble on his experience as a former member of EDL was powerful and informative.”

We want to thank everyone who has supported us, attended our events and helped spread our message further.

Learn more about our work in our 2019 Annual Report.