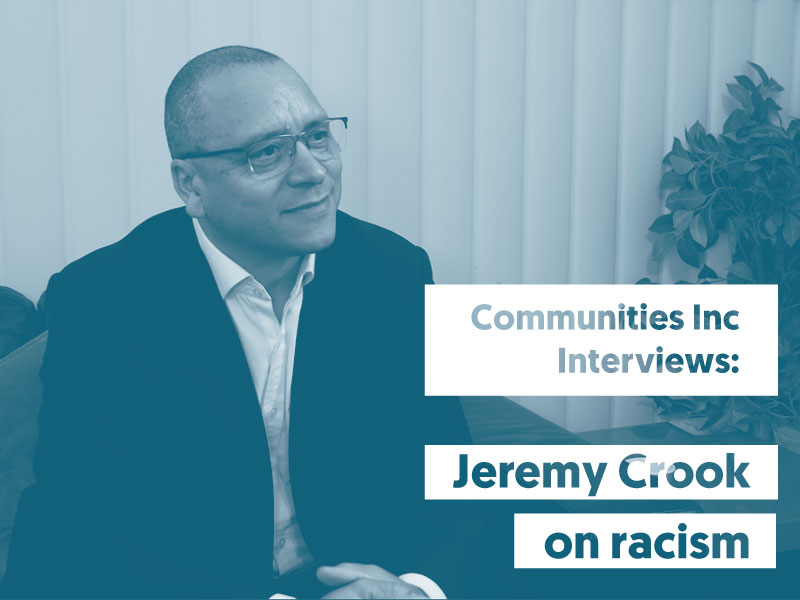 At our recent Discussion on Racism event, Jeremy Crook, Chief Executive of the Black Training and Enterprise Group, explained why racism is still a significant problem in the UK, Europe and across the globe. Afterwards, he spoke to our Creative Director, Shamsher Chohan, about how he defines racism, what non-BME people can do to tackle the issue and how the face of racism might change over the coming decade.

Could you tell us firstly about BTEG? When and why was it established?

BTEG was established in 1991, through the National Council for Voluntary Organisations. Around 60 mostly Black and Asian local organisations at that time wanted a national voice and action research to be undertaken to influence public policy, particularly in relation to the training and enterprise council that was setting up at the time. They were mainly local providers who were helping unemployed people into work and to start businesses.

Next year will be thirty years of BTEG and I’ve been there twenty-nine years. Today we work with young people around the age of 10-30; helping them realise their full potential through education, employment and entrepreneurship. We have a small volunteer army of black and Asian individuals who provide role modelling, workshops and mentoring.

We also do a lot of work nationally on the justice system, education outcomes and we’re just about to start a new initiative in London tackling serious violence from young people – young, black males – trying to make sure they stay out of the justice system.

Working with Black and Asian communities, you must come across racism in the work that you’re doing. So, how would you define the term ‘racism’?

Racism has always been where ethnic groups and Black and minority ethnic individuals experience serious disadvantage in terms of opportunities, services. Racism can be direct, physical, violent – it can result in death. So racism, in terms of my work, is trying to make sure that organisations, particularly public authorities and employers do everything they can to minimise the unfairness in the workplace towards BAME communities. So they can realise their full potential and go about their daily lives free from fear of being physically or verbally abused, and feel safe and secure as British citizens.

Obviously there’s a global aspect to racism as well. We try as an organisation to eradicate racism, remove unfairness and make sure every community, every individual, can be who they want to be.

You mentioned a few different ways that racism is expressed. Do you think that’s changed over the years?

Racism in some respects has become more subtle. It’s often not easy to detect in the first instance; there’s a lot of microaggressions where comments are made about people who are different, for different reasons. Some of that may be unconscious.

The whole language of unconscious bias is important but we’ve got to remember that there are biases which are direct. People can still make people feel uncomfortable and treat them less favourably because of the colour of their skin, their sexual orientation or their ethnicity.

In some respects we’re in a different place to where we were twenty or thirty years ago, where direct discrimination was more common – especially in terms of employment and housing – it’s more subtle now. People have learnt a language in which they can get the outcome they want and not be seen to be discriminatory. It’s a real issue how we tackle that. I’m not sure legislation has moved with the times – I still see in public organisations major disparity in terms of ethnicity, especially in terms of senior opportunities and leadership roles. We need to be clear what we mean by inclusivity – for me, that means seeing people from all backgrounds at all levels in organisation.

“People have learnt a language in which they can get the outcome they want and not be seen to be discriminatory.”

People’s responses to racism can be diverse. How would you respond if someone suggested you can’t say anything today without being called racist?

I don’t really buy into that. We’ve (at BTEG) always encouraged people to be respectful, frank and honest. We can all say we’ve got some biases – nobody’s perfect – but we need to be able to speak about inequality and race and ethnicity and understand what the issues are and then find the solutions to them. If we can’t say ‘that’s a black person’ or ‘that’s a white person’, you’ve got to be able to speak to that person to say ‘how would you like to be described?’

In terms of dealing with inequalities, you’ve got to categorise people in some shape or form. I appreciate people don’t like labels and some labels are problematic. People are trying to find a space where they can identify with something but the diversity we have in this country is much deeper than it was twenty or thirty years ago so we’ve got to be a bit more nuanced about how we talk about diversity, especially ethnicity.

I imagine you will have experienced racism – whether it’s in your professional or personal life. How do you personally respond to racism that you experience?

I was born and raised in Walsall in the West Midlands and in the seventies and early eighties you could not get a job – even in the supermarket – if you were black. There was a lot of overt discrimination and I’ve always found talking to family, close people, about your experiences is really important. You’ve got to share how you deal with racism because if you internalise it, it becomes a real burden.

I’ve spoken to many people over the years who’ve tried to deal with racism in the workplace and taken their employers to tribunal and it’s very stressful, not to mention being physically attacked by someone. You need support and we need community organisations to support people – to provide guidance, strength and direction. Not only legal support but also mental health wellbeing.

Unless you’ve experienced racism in that way, it’s really hard to communicate to people what it feels like – that rejection, hurt and the trauma it causes. We’ve spoken to a lot of young people and they really feel the impact of negative stereotypes. The way an employer looks at them or talks to them when they go for an interview and they see in the media, for example, the portrayal of young, black men as drug dealers, violent, thuggish. It really impacts on them and I don’t think we really understand the impact that has.

We’ve got to give young people – as well as old people – the space to talk. Young people are walking around with these feelings which are real and unless the older people are listening to them, we’re building up a generation that’s going to be very frustrated with the lack of understanding and opportunity.

“Unless you’ve experienced racism… it’s really hard to communicate to people what it feels like.”

What would you say individuals can do to tackle racism, and hate speech in particular?

Individuals need to be supported and work in groups, and feel that they can participate in trying to tackle these problems. We need a justice system which can deal with hate crime effectively; that listens to victims.

I’d like to think that in Nottingham – with all the work that you’ve (Communities Inc) been doing as an organisation in the community – that it’s more understood. That public authorities and the police and the legal system can deal with it better, and that people who are perpetrating these crimes can be shown to be punished properly.

Individuals need to know where they can go to get that support and help. We all want to see, as a community, that we’re dealing with these problems properly.

What role do you think non-BME people could be playing, to be allies?

We definitely need allies. We need the whole community, those who want to be part of a community that’s fair and inclusive. They need to stand up – support things, join things and use their voice, wherever it can be heard. There are faith organisations everywhere. We need to be vocal – don’t be silent. There’s help in the community to tell you what you could do that’s helpful. Seek that help and contribute.

“We need the whole community… to stand up – support things, join things and use their voice, wherever it can be heard.”

How do you see the face of racism changing in the next decade or so?

Racism is a difficult issue to always have a strong answer to. It can be very complex and everyone has their own view. We can see across Europe a growing prevalence of overt racism – we need to be very careful not to create a political climate where being racist is the norm.

We look to politicians to set the tone morally and politically, as well as faith organisations, and we’ve got to make sure that faith and politics have a better understanding of what’s right and what’s wrong.

We, as a society, (need to) stand up and set out what our values are – and what we expect from people in terms of behaviour, on an everyday basis.

Previous How are you doing? – our latest newsletter
Next Tackling online hate: creating social media campaigns which change the narrative