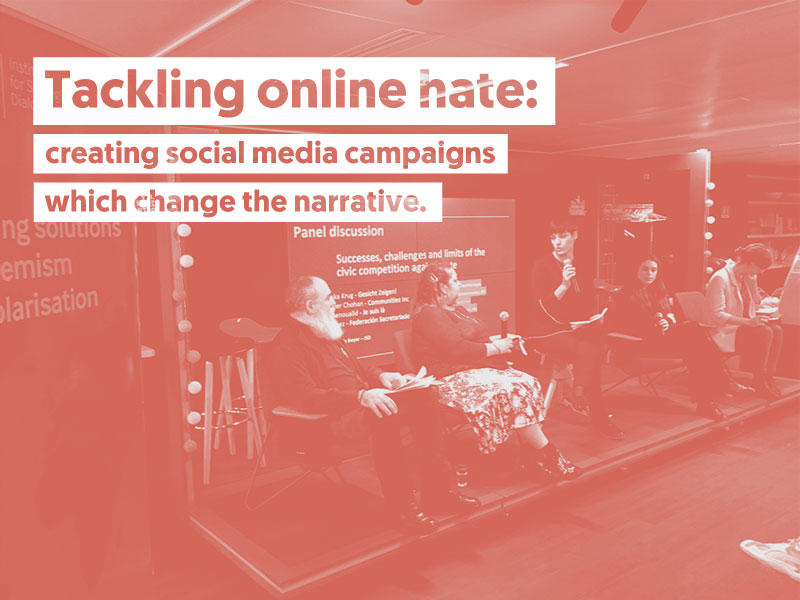 In December 2019, our Creative Director, Shamsher Chohan, was invited to speak at the Online Civil Courage Initiative’s European Summit (in co-operation with the European Code of Conduct) in Paris. In this blog, Shamsher shares what she learnt from the other participants – including representatives from IT giants such as Twitter, Facebook and YouTube – about campaigns to tackle hate online.

Why is social media such a hotbed for hate?

Social media tends to polarise opinion. People either love it or hate it. The irony is that these are the two main emotions which are often expressed through social media. People love to share their stories, pictures, successes, learning and development or they stalk, bully, intimidate and express hostility.

Online hate has been a challenge not only for agencies trying to tackle it but also for the social media providers on whose platforms it takes place. IT Companies (including Facebook, Microsoft, Twitter and YouTube) share the European Commission and EU Member States’ commitment to tackling illegal hate speech online whilst balancing this with defending the right to freedom of expression. Together, they launched the EU Code of conduct on countering illegal hate speech online in May 2015.

What else is being done to address hate online?

Last December, due to the success of our Stand by Me project, I was invited to the summit in Paris to join a panel discussion. The purpose of the panel was to spark inspiration and share experiences on the best way to conduct a campaign against hate, by highlighting examples of cutting-edge campaigning and strategies.

Many members took part, such as a Spanish organisation tackling anti-gipsy sentiment through digital campaigning and creative communications; a German enterprise addressing far-right narratives; and the French branch of the citizen-led online movement ‘I am here’, a closed group which tackles hateful comments on Facebook.

Stand by Me project: find out more

What are the dos and don’ts for counter-narrative campaigns?

Some key themes emerged from the panel discussion in Paris relating to what should and shouldn’t be implemented as part of a campaign of this kind, such as:

There are 3 steps to focus on when designing a campaign:

There are also 2 steps to remember when developing your campaign:

The key elements to consider when creating content for social media platforms are:

How can a hate hackathon help you create a campaign?

After the panel discussion at the summit, we broke into small groups with a designer to create content for a campaign, including establishing the key message and concept.

I was in a group that went for a concept related to new year resolutions and the desire for change, tying it in with a food-related theme.

With a key message of ‘Are you hungry for change?’, the concept we developed was a ‘menu’ of things that people actively involved in their communities could do. This included a restaurant-style menu, with ‘starters’ (i.e. small acts that don’t require too much effort), ‘mains’ (more substantial actions) and ‘desserts’ (activities with a nice reward). Our target audience was the grey zone of people who are not really engaged in politics.

Having a group of people with diverse skills and experiences working on a campaign together meant that everyone bought a unique perspective to the campaign. The presence of a designer, for example, meant they could provide insight into how a message could be communicated visually.

What are the platforms’ recommendations to not-for-profits?

Representatives of the IT giants present at the conference provided insight for not-for-profit organisations., including experts from YouTube and Twitter:

Tips on how to maximise the effect of your digital campaigns:

So what’s the most important thing to consider when creating a campaign on tackling hate?

The summit was a great opportunity to share knowledge and experience with others and to hear about the work that different social media platforms are doing to tackle hate speech online. Their input into developing effective campaigns was particularly helpful, given their expertise in social media.

The principal message was – as with any other online campaign – that you need to be clear on:

Therefore, for a campaign which aims to eradicate hate online, it is crucial that you communicate clearly to your audience how and where they can report hate speech, otherwise incidents of hate will continue to perpetuate the problem.

Black Lives Matter – how to support

We must end sexual harassment against women and girls in colleges. 3 ways men can be better allies.