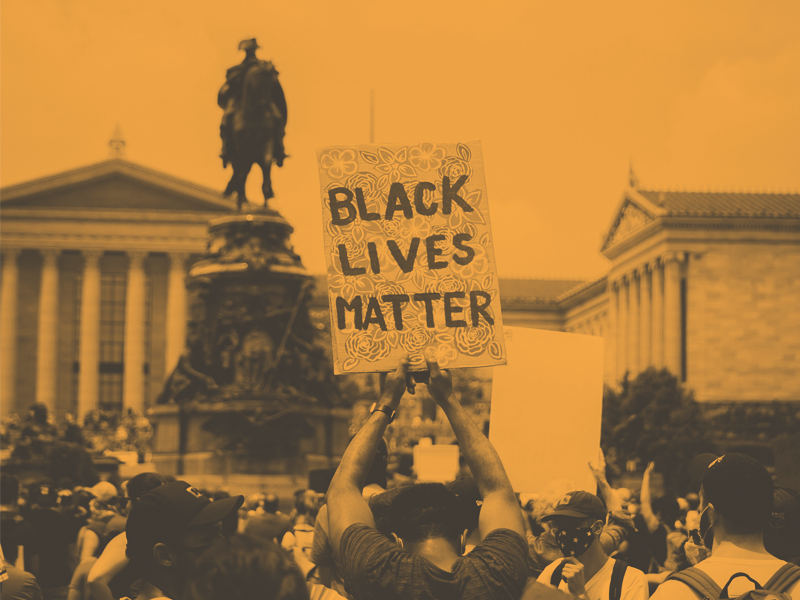 Where did the term ‘Black Lives Matter’ (BLM) originate?

The message ‘Black lives matter’ (BLM) has gained incredible momentum in the light of the deaths of George Floyd, Brianna Taylor, Ahmaud Arbery and Elijah McClain in the United States in 2020. However, BLM as an organisation has been around for several years.

BLM started back in 2013 after George Zimmerman – who shot and killed an unarmed teenager – Trayvon Martin – was found not guilty. This sparked a debate on racial profiling (suspecting someone of a crime because of their race) and civil rights. Alicia Garza first used the words’ Black lives matter” in ‘A Love Letter to Black People’. It quickly became a hashtag. With Patrisse Cullors and Opal Tometi, Garza then created the Black Lives Matter movement.

Black Lives Matter is now a global movement. It has a powerful presence, particularly in North America, Europe and Australia. Activists not only fight police brutality but educate the public about other challenges that black communities face. Yet, there are still many people who disagree with BLM and want to discredit it. Together with The Next Gen Movement – responsible for organising the BLM protest in Nottingham – we researched the most common myths about the BLM movement.

BLM doesn’t mean black lives matter more than others. It means black lives shouldn’t matter less. Black people in the UK experience some of the highest levels of racism.

Myth 2: BLM is a socialist organisation.

BLM started in July 2013 as a global organisation in the US, UK, and Canada.

It aims to dismantle white supremacy in those countries. In a video from 2015, the founders identified as ‘trained Marxists’. That, however, doesn’t mean that the BLM is a Marxist organisation. BLM is more complicated than that. Since 2013, BLM has grown and gained incredible momentum. People from all walks of life and political spectrums came out to protest, and a lot of groups and events sprung up outside of the BLM organisation. The BLM movement, or hashtag, can be described as fighting against racism, for equality and the fair treatment of black people. Therefore not everyone supporting BLM is a part of the BLM organisation.

Myth 3: Racism isn’t a problem in the UK

Racism is still an issue in Britain. In the National Centre for Social Research’s report from 2017, 25% of participants described themselves as ‘racially prejudiced’. In the 2014 European Social Survey, 18% of UK respondents also believed that ‘some races and ethnic groups are born less intelligent’.

The Home Office also reports most hate crimes committed in England and Wales in 2018/19 were race hate crimes. They also released a report suggesting that race and religious hate crimes in June 2020 were 34% higher than June 2019, most likely due to #BLM counter protests. The UK is not the most racist country in the world, but racism is still a big problem that affects many people’s lives.

Myth 4: The UK Police treat everyone the same.

The police aren’t a racist institution as a whole. In fact, they monitor race hate crimes and do a lot of awareness work to try to prevent them from happening altogether.

Myth 5: BLM is an excuse to steal and riot.

According to The Armed Conflict Location & Event Data Project out of over 7,750 Black Lives Matter demonstrations in the US, more than 93% were peaceful. In contrast, out of over 360 counter-protests they recorded though, 11% had turned violent. BLM protests were never organised with the aim of rioting. In fact, there is a strong link between the rise in violence at BLM protests and the presence of far-right groups.

In the UK there have over 130 BLM protests in 2020 so far, with only a few in London turning violent, as small groups clashed with the Police. The biggest riots took place on the 13 June, when in fact the BLM protest got cancelled due to the presence of far-right groups. Counter-protesters clashed with the police and over 100 people were arrested. BLM supporters also faced intimidation in Newcastle, having smoke bombs, bottles, and flares thrown at them.

There are many myths surrounding the BLM movement, which is why it’s so important to find out the facts rather than risk spreading misinformation. Download a copy of the free Myth Buster below and you’ll have the facts on these 5 myths to hand whenever you might need them.