2020 in review: Our team’s highlights 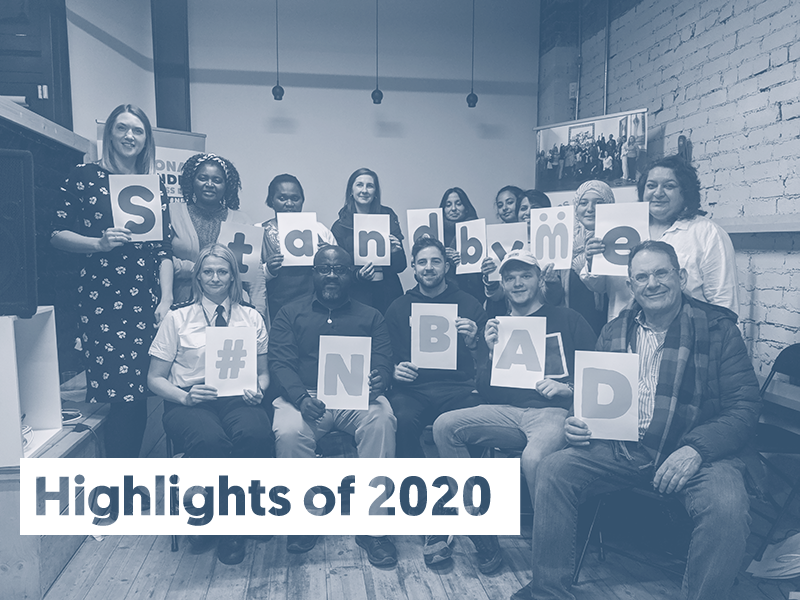 We think we could all agree that 2020 was a challenging year in many ways. As individuals, communities and organisations, we’ve all been cast into the unknown, having to find our own ways through.

While on an individual level work life merged with home for many us, the organisations we work for had to re-evaluate their procdeures – and sometimes their whole existence.

At Communities Inc we also had to reassess our practices but we have always believed that constraints can be the root of human invention. It is this belief which has enabled many organisations to embrace the challenges – often with awe-inspiring results. At Communities Inc we have adapted, re-assessed and transformed and not only have we continued our work in new forms but we’ve also identified new areas to support – areas which have been highlighted by the pandemic.

As a way of reflecting on our achievements this past year, we asked our team about their favourite moments and events of 2020. Here’s what they had to say:

‘One of my highlights was the themed walk we did with the National Justice Museum & New Art Exchange.”

In January 2020, together with the National Justice Museum and New Art Exchange, we organised a unique, historical Walk the Talk event. Nearly forty people from all walks of life joined in. It was an excellent opportunity to discuss justice and share our experiences with each other. We also engaged in mindful grounding exercises ran by Parmjit Sagoo.

“Great, diverse turnout and icing on the cake was the passionate presentation by Dr Martin Glynn following the walk.“

As is customary at the Walk the Talk events, after the walk we had a brew and continued the discussion – this time in a beautiful reception room at the National Justice Museum. This was when when Dr Martin Glynn joined us for an impromptu talk about freedom.

This event stole the show as it was listed in nearly every team member’s  highlights.this year. We set up National Bystander Awareness Day (NBAD) back in 2018, as a yearly event to help spread the bystander intervention message further.

Earlier that year we reached out to two talented writers Bridie Squires and Shreya Sen Handley to ask if they would be interested in supporting the cause. We met to discuss our cause and messages, and they wrote poems about standing up to hate. We then filmed these and incorporated them into a social media campaign and a well-attended event. We also heard from Nottinghamshire Police and Crime Commissioner, Paddy Tipping, Cllr Rebecca Langton and Stand by Me Ambassador, Marwa Soliman, also spoke about standing up to hate and why the campaign is so important.

It was the last event we organised before the lockdown and the last time we met in person as a team.

“In a challenging time for us all, the dedication of everyone involved made it a great success.”

‘My highlights were definitely NBAD and starting Stand by Me UK.’

On February 3rd, we announced that Communities Inc had become one of the twenty-nine grantees in Europe and only three in the UK for the Google.org Impact Challenge On Safety. Our Creative Director, Shamsher, travelled to Brussels for the official announcement.

“I was so excited when I heard the news from Google.org. We had secured one of the 29 grants from over 900 applications across Europe! It meant that we could take our Stand by Me national and more people could benefit by knowing what they can do if they witness hate.”

Stand by Me UK is a project that empowers people to assist victims of bullying, harassment or hate through safe bystander interventions. We train people in England, Scotland, and Wales so that no one has to suffer from hatred anymore.

I’ve been working on the Stand by Me project from the beginning, and it’s very close to my heart. It’s great to see that others also see its value. “

Despite the pandemic, we’ve been keeping busy. Since Stand by Me Uk began in June, we’ve t carried out many training sessions across both the West Midlands and in Liverpool, Produced and distributed thousands of copies of resources and filmed a new case study.. We also started building a dedicated Stand by Me website, focusing on raising awareness of how to tackle hate.

Learn about Stand by Me UK

My highlights were NBAD and Far-Right Awareness Training for Nottingham City Councillors.

During National Hate Crime Awareness Week last October, we had the were asked to deliver a far-right awareness session to Nottingham City Councillors. Sam, who has extensive knowledge on the topic, took a leading role creating this session.

Our far-right awareness work is a part of  Positive Exposure  – a strand of our Building Stronger Communities project, funded by the National Lottery Community Fund.

During this training, we looked at the current position of far-right, what narrative they’re using to gain followers, and what can be done to counter it.

Training in the West Midlands -Janet, Stand by Me UK project Administrative Coordinator:

“For me, the highlight was doing admin for SBM training in the West Midlands. It was my first dive into the Bystander Intervention training.“

This wouldn’t have been possible without Janet. Despite being a new employee, she rolled up her sleeves and ensured that the entire operation ran smoothly.

“I was blown away by the positive response and the training package, and I was working as part of a fantastic team to make it happen.“

During those intense ten days, we trained 120 people in bystander interventions and distributed over ten thousand copies of our resources. Here’s what some of the participants had to say:

‘Very different approach than any other training I have had. Very hands-on and touches on some really good stuff. Well done.’

‘This has been eye-opening and so needed in these times.’

‘I feel really confident now to support someone who is on the receiving end of hate crime. Enjoyed the training and learnt a lot’

Learn more about Stand by Me UK

“The highlight of 2020 was starting working for Communities Inc”.

Will is our newest employee, who joined the team in October, to work on Tackling Hate in the Pandemic – a new strand of our Building Stronger Communities project, funded through The National Lottery Covid 19 Fund. It was essential to introduce this new strand, as hate crime against Chinese and East Asian communities in the UK has increased by 21% during the pandemic. .

“It allowed me to work towards a good cause, talk to people who experienced the same racism as I did, and spread the message about hate crime.”

Since he joined, Will has been busy with outreach to Chinese and East Asian Communities, speaking to business owners, distributing flyers and delivering hate crime awareness sessions at his university.

Learn more about Tackling Hate in the Pandemic

And there you are – a year of hard work told from the perspectives of our team. We want to say a big thanks to all of the staff for their hard work and dedication. Communities Inc wouldn’t be the same without them.

We also want to thank our partners, supporters, and everyone who attended our events and shared our messages – for helping us make a difference.

Previous Getting support: Jobs and finance in a time of COVID – Dialogue
Next Communities Linked: A series of community conversations